The Treilles meetings are intended to make more widely known the work of the Foundation in the fields of research and creation.

Moments of the meetings 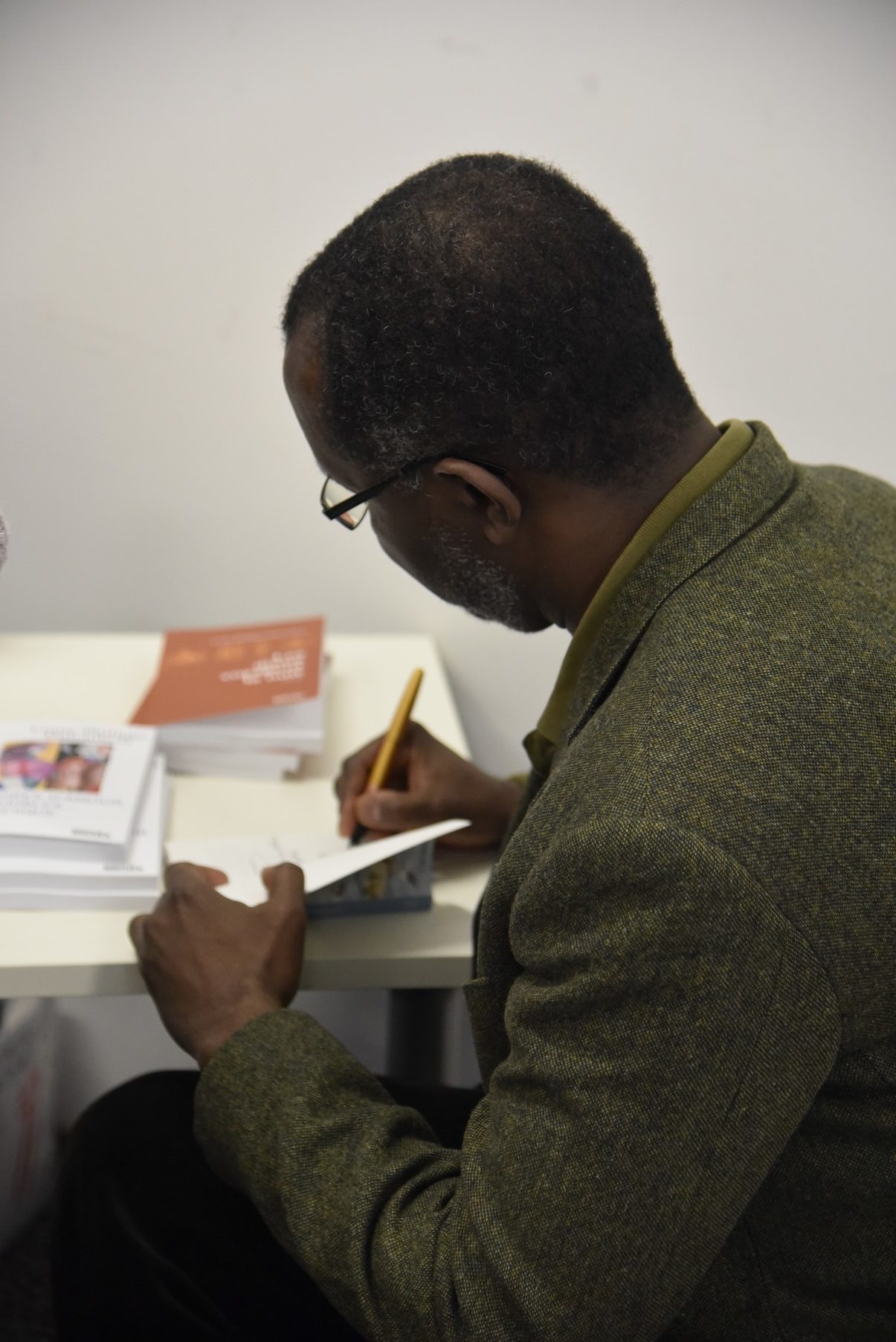 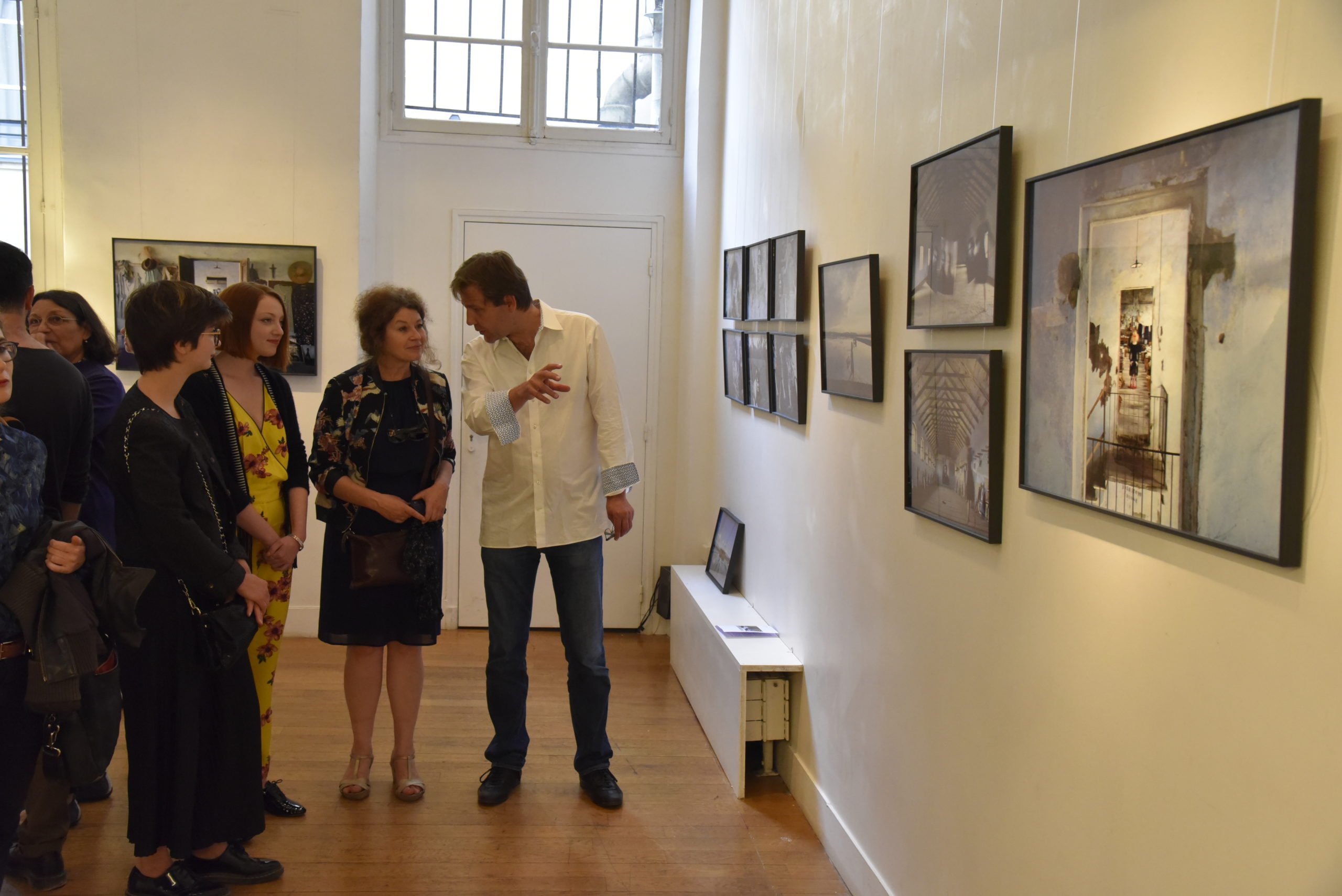 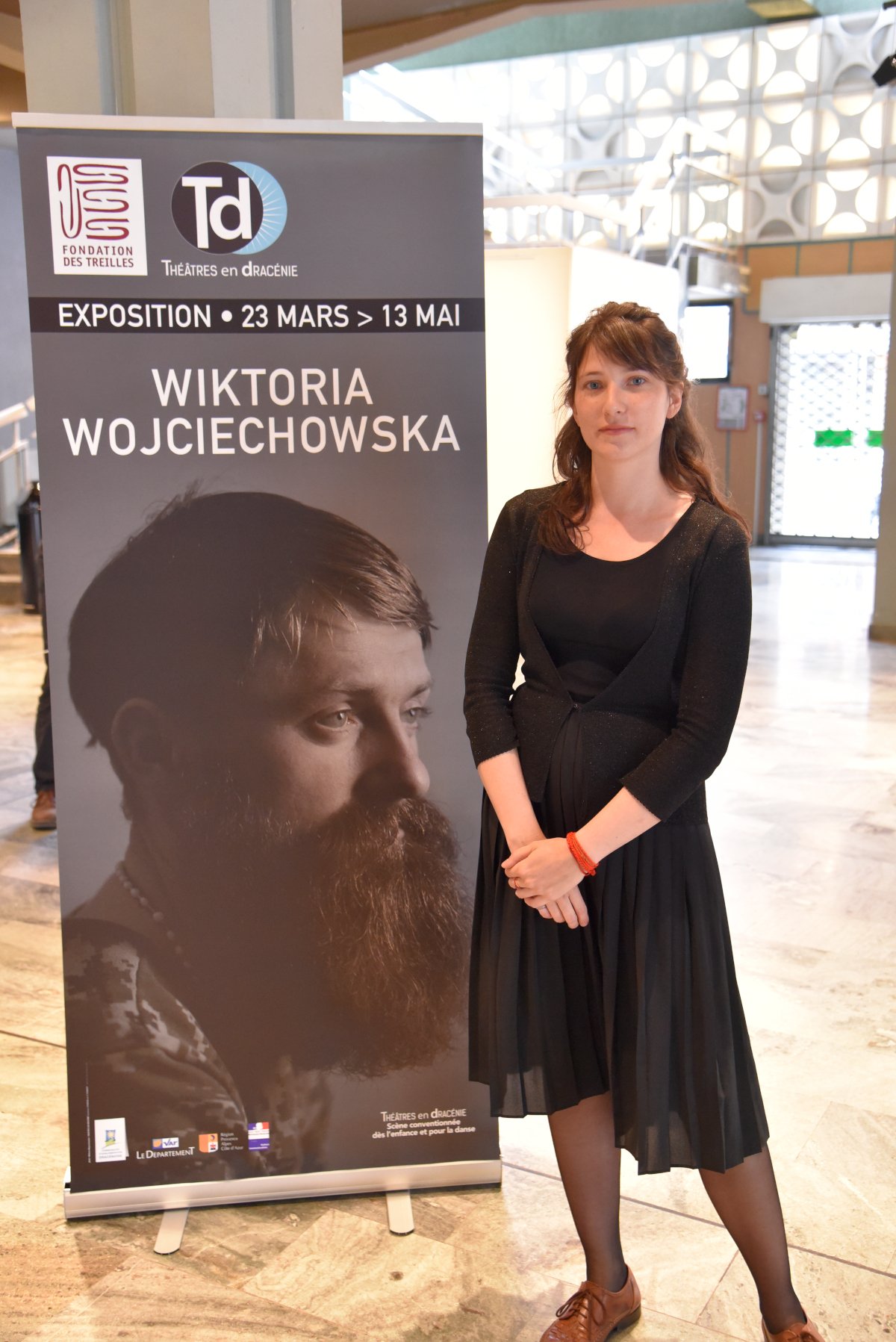 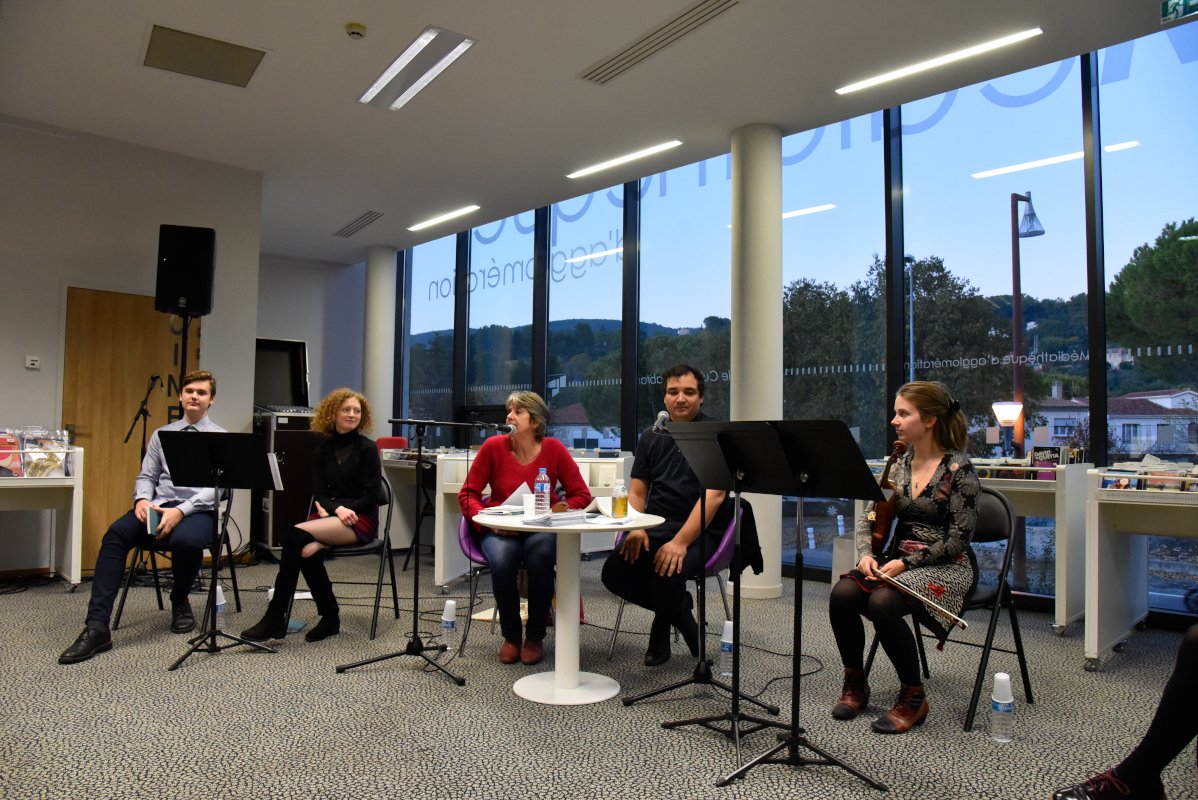 Usually closed to the public, since 2017 the Fondation des Treilles has been regularly organizing, in partnership with public and private institutions, scientific and cultural meetings intended to share its activities.

Resulting from a collaboration with the media library of the Draguignan Chabran Cultural Centre (South of France), the project of meetings between writers and readers was born in 2018. The theme of these meetings revolves around a novel written by the author in residence at the Foundation. The writer share a moment of reading with the public and, guided by a moderator, explains the creation process of his/her work.

During artistic meetings, our residents exhibit their works, and make the visitor discover their connections with art : mainly photography, but also painting, music or literature. They show to the public the work provided in residence and share the result of their inspiration.

Other multidisciplinary meetings are also organized, such as the one that took place at the Hôtel de Sauroy (Paris) in 2018, where researchers who stayed at Les Treilles, artists in residence, opera singers from the Master Class and contributors to the Foundation met the public in order to discuss the Foundation’s various missions and fields of intervention in the cultural field.

« André Gide and the painters » : round table and visit of the collections 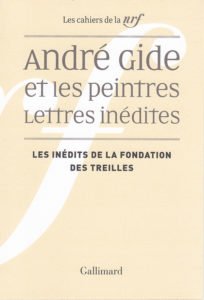 This meeting was organized for the launch of “André Gide and the painters. Unreleased letters“, a book edited by Pierre Masson and Olivier Monoyez with the collaboration of Geneviève Masson at Gallimard publisher (Unpublished works from the Fondation des Treilles, collection the NRF notebooks).

It took place on the 13th of February 2020 at the Orsay Museum auditorium in Paris.

In the analects of the Fondation des Treilles at Gallimard, a new volume entitled “André Gide and the painters. Unreleased letters” documents André Gide’s links with Maurice Denis, the Van Rysselberghe and the Bussy family and allows us to grasp the diversity and evolution of the writer’s relationship with painters. This original corpus, which sheds light on the friendship which linked André Gide to artists like Odilon Redon or the fresco artist René Piot, also gives the opportunity to highlight the support of the writer, familiar with galleries and salons, to his contemporaries, in particular through the purchase of their works.

Link to the programme 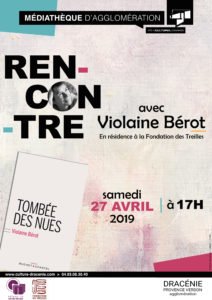 During her meeting with the public of the media library, Violaine Bérot, laureate of the 2019 Author’s residency Prize, addressed the theme of her latest work: denial of pregnancy. Fallen from the clouds tells of a birth by surprise, by breaking and entering. One snowstorm night, alone in her bathroom, a woman gives birth to a child. But is it conceivable to give birth when you are not aware of being pregnant ? Through a play of crossed voices, Violaine Bérot tells us the story of a puzzling motherhood.

“That this baby allowed himself to enter inside me without my permission was intolerable to me, I did not accept the violence with which he had forced himself into my body, I could not bear this intrusion, this “defilement”, but to whom could I have told that … “

The author has worked a lot on form, rhythm, and added a specificity to her writing game: the absence of a point. This contributes to making the plot even more breathtaking. The book can also be read on several levels. The voices of the characters fit together in a puzzle of numbered paragraphs that can be read in two different orders.

“We admire the skill of the novelist Violaine Bérot, who has succeeded in making silent mountain dwellers speak and in orchestrating their beautiful solitary personalities. » Astrid de Larminat. Le Figaro littéraire.

The Fondation des Treilles meetings at the Sauroy hotel

From May 11 to 20, 2018, the Foundation organized at the Hôtel de Sauroy (Paris) an exhibition of the winners of the Photography Prize and round tables presenting all of its activities, ranging from the organization of seminars and residential studies devoted to research in all fields of knowledge, actions or meetings for educational purposes, hosting writers and photographers in residence, training young singers with the Voice Academy, to promoting the collection of works of art bequeathed by the founder.

Link to the full programme 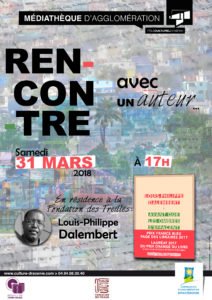 The meeting with the author Louis-Philippe Dalembert, laureate of the 2018 Author’s Residency Prize took place in March 2018. He spoke about the reasons that pushed him for writing his book Before the shadows fade away, in which he tells the story of a young man coming from a Polish Jewish family during World War II and his exile in Haiti.

In the prologue to this saga leading the protagonist from Poland to Port-au-Prince, the author recalls the vote by the Haitian state, in 1939, of a decree-law authorizing its consulates to issue passports and safe conducts to all Jews who requested it, thus allowing them to escape Nazism.

Thanks to this decree, before his arrival in Port-au-Prince, Doctor Ruben Schwarzberg was one of those whose path had been broken by Nazism. Having become a renowned physician and the patriarch of three generations of Haitians, he had left his past behind. But, when Haiti was hit by the earthquake in January 2010 and among doctors coming from all around the world, his little cousin Deborah rushed from Israel, he agreed to reconsider his story. His book won the France Bleu-Bookstore Page prize in 2017, and the Orange book prize in 2017.

Michaël Ferrier, laureate of the 2018 Author’s Residency Prize, came to meet the public in the fall of 2018 to talk about his novel François, portrait of an absent. 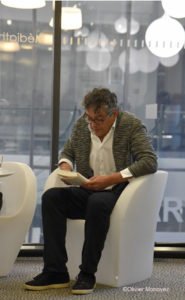 A blank voice, appearing in the middle of the night, announced to Michael the death of his friend François and his daughter Bahia, both brutally swept away by a villainous wave on a small island in the Canaries. To exorcise the pain, the author decides to write down the story of their friendship, and gives us a portrait full of tenderness of his childhood friend.

We discover Francois’ life, who began his career as a film director and finally joined the world of radio. Michaël recounts with nostalgia their memories from high school, the discovery of Japan, where he now lives, the endless debates and discussions of two friends who were passionate about music, cinema and radio. He evokes their good times, but also quite unexpectedly, their argument : their “quarrel”.

“How to talk about the disappeared? Indeed, by writing what never has the weight of a “tomb”, Ferrier also questions literature, and how words can bring this exceptional and beautiful friendship to life. ” Le Point. 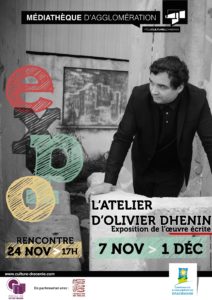 This literary encounter is part of a plural journey: an exhibition and a reading. Both poet and director, Olivier Dhénin, laureate of the 2018 Author’s Residency Prize, is the first playwright received as part of the Treilles writing residencies. During his stay he worked on the writing of Waldstein, the third installment of his Trilogy : The Ordeal, which follows in the dramatic lineage of the Greek Tragics.

Presented alongside his writing residency, Olivier Dhénin’s workshop exposed the poet’s artistic connections, the playwright’s intimate links with painting, music, photography and literature. In this artist’s studio, different sources of inspiration, works and their transformations in contact with other artists were developed.

How the poem becomes music thanks to the composer, how the words are transformed into colors thanks to the painter and the photographer; how an old novel, a film scene, a painting are revealed as a source of inspiration that generates the writer’s work. The exhibition brought together a collection of unpublished documents: manuscripts revealing the genesis and labour of his writing, musical scores and artist books that constitute the poet’s constellation. This workshop fits into Anne Gruner Schlumberger’s approach, who wanted the different arts to meet.

n 2017, the Draguignan theater exhibited the work of Wiktoria Wojciechowska, winner of the 2015 Photography Prize. With her series Sparks on the war in Ukraine, consisting of portraits of young men who became soldiers and who joined the front, she tries to show the traces of war on the faces and in the eyes of young combatants.

Hicham Gardaf has also exhibited at the Draguignan theater. He is a Moroccan photographer who lives between Tangier and London and works on the representation of the major changes that Morocco is experiencing nowadays. He won the 2014 Photography Prize. His project for Les Treilles is a description of the great urban, socio-cultural transformations, and it addresses the question of Western modern society’s identity and vision in the Arab world.

Winner of the 2011 Photography Prize, Raed Bawayah lived a story worthy of a film script. At the age of ten he began to work as a fruit picker on an Israeli farm, and then sold grapes in the streets of Jerusalem. It was by observing the tourists strafing the Holy City that his passion for photography began. At 28, against all odds, he joined an Israeli art school, the Naggar School, and went there illegally every morning to take photography lessons. He is today a recognized professional.

Through his various black and white series, he constantly questions exclusion, isolation, normality and finally the place of human beings. Whether it is with children from his village, Palestinian workers forced into exile in Israel, patients at the psychiatric hospital in Beethlehem, or even gypsy communities in France and homeless people in Germany, Raed always operates with a “inside” approach. He then produces a realistic and objective photographic work, preserving modesty, compassion and respect, devoid of any miserabilism.