Novel technologies now enable us to generate human muscle in vitro as pioneered by one of the organisers (Pourquié) and measure mechanical forces across muscle fibers and even muscle proteins in vivo as applied by the other organiser (Schnorrer). In parallel electron tomography opens the avenue towards an atomic resolution of a sarcomere and together with X-ray crystallography will unravel how mature sarcomeres work and more importantly how functional sarcomeres are made during development. Complementary to the in vivo studies, in vitro self-organisation dynamics of actomyosin assemblies, modelling and tissue microfabrication should gain important insight into how to generate muscle fibers in vitro in more controlled ways. These insights should be particularly stimulative for the field of muscle ageing and disease as it may inspire new avenues for treatment.

An essential characteristic of animal life is the neural control of movements during a process called locomotion. The types of locomotion vary with natural habitats : while animals in the water swim, others on earth crawl, walk or fly in the air. In all cases however, locomotion relies on the oscillatory activity of motor neurons that control the contractions of skeletal muscles. Comparative studies have revealed a remarkable conservation in the patterning of vertebrate motor circuits, raising the question of how the composition and architecture of motor circuits have evolved within specific cell lineages from a swimming ancestor. The goal of our meeting will be to discuss our understanding across species in order to shed light on the structure and dynamic recruitment of the descending commands from the brain to the ventral cord, the role of sensory and ascending feedback shaping locomotion.

Transgenerational epigenetics refers to the inheritance through gametes of information that affects the traits of offspring without alteration of the DNA sequence. This is a highly topical and exciting research area that challenges the very foundation of both classical and molecular genetics and which has potentially profound implications for society. We propose to explore and discuss the multiple facets of transgenerational epigenetics with a collection of internationally renowned specialists. We aim to address (i) the diversity of molecular mechanisms at play; (ii) the role of genetic and environmental factors as well as of their intersection in establishing, maintaining and erasing transgenerational epigenetic memory; and (iii) the consequences for our understanding of complex traits, including diseases, adaptation and evolution. This meeting aims at making an in-depth examination of the facts, controversies and societal implications in the study of this still largely enigmatic alternative system of inheritance.

The project of this residential study  is to write a biographical work on Jean-Victor Poncelet (1788-1867). One of the key innovations that Poncelet introduced in geometry is the notion of ideal element. This notion – which he explicitly distinguishes from the notion of imaginary element – is intimately linked to one of the principles under the aegis of which Poncelet places projective geometry: the principle of continuity. Our thesis is that this principle had a much greater impact on nineteenth-century mathematics—and modern mathematics in general—than the projection principle, which historians usually emphasize. Kant’s philosophy also interested several mathematicians in France at the time. This project therefore has a double challenge. It will first be a question of determining the nature of the impact of the philosopher Kant on mathematicians, and of underlining the major role of the philosophical activity of mathematicians on the mathematical innovations that they introduce. It seems important to us to highlight that, in the past, philosophical reflection was not an extra soul for the mathematician, but that it often played an essential role for the very advancement of mathematics.

Write a travelogue in Latin America, in the footsteps of Che Guevara.

“What was I going to do now? I examined my reflection in a mirror: at the corners of my eyes were sketched a few wrinkles; under the eyes, dark circles had turned blue. My youth took off; my bag, the dust at the bottom of a cupboard; it was time to leave, without reason or delay. But in which direction ? It was from Córdoba, Argentina, a day’s drive northwest of Buenos Aires, that twenty-nine-year-old Alberto Granado, known as Mial, and his friend Ernesto Guevara, known as Fuser, left on December 29, 1951, twenty three years. The route: Argentina – Chile – Peru – Colombia – Venezuela. The objective: to see the country. From this trip, Guevara and Granado had each drawn a story. The route was traced; I just had to follow him. One morning I left. Six months later, I was back. It is this journey through Latin America, in the footsteps of the man who would become Che, that I would like to tell.” [find out more]

Her project: The torn lands 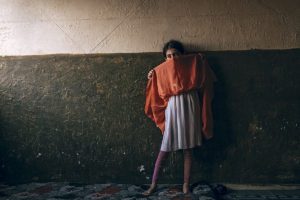 From 1985 to 1987, during the ‘War of the Camps’, Gaza Hospital was targeted by the Shiite Amal party militias supported by the Syrian occupier. In 1988, the hospital was completely dismantled and the facilities looted or destroyed. Gradually, the hospital will house generations of Palestinian refugees and then Syrians escaping the conflicts, but also poor Lebanese workers as well as Egyptian, Moroccan and Bangladeshi migrants fleeing poverty. Former enemies for some, they now share the framework of the same dilapidated architecture with porous strata, combined by the necessities of extreme precariousness and promiscuity. There are formed by capillarity of transnational families, sometimes transcultural. In this sense, Gaza Hospital offers the iconography of a “survival” together, of a society which, if it sometimes remains economically staged, is gradually changing beyond origins and confessions. [learn more]

The Belle-Epoque of criticism: writing strategies and positioning in the literary field from Barrès to Gide

This seminar proposed to reflect on the stylistic, aesthetic and sociological issues of critical writing during the Belle Époque, through the paradigmatic examples of Maurice Barrès and André Gide. The seminar thus intends to reflect on the way in which critical writing could constitute, for these two “masters” (Gide having also been significantly influenced by Barrès), a real literary strategy: it was a question of seeing how writing criticism contributed to building their authority in the literary field, while bringing to light, through the example of their writings and their choices, some forms and issues of critical writing during the Belle Époque, in terms of style and posture. [find out more]

Watch the video presentation of the seminar by Stéphanie Bertrand and Pierre Masson on our Youtube channel.