How proteins, RNA and lipids are transported within cells is one of the most fundamental questions in biology. This question is not only essential to understand the communication of cells with their environment through exo- and endocytosis but also bears the question of how organelles maintain their identity, regulate copy number and/or size and homeostasis. Proper trafficking of material is a prerequisite for most cellular processes. Defects in intracellular traffic are the basis of numerous diseases including lysosomal stage diseases, cystic fibrosis, lipid metabolism disorders, neurodegenerative diseases and cancer. The broad range of diseases caused by malfunctional intracellular transport and communication between membrane organelles underscores the importance to understand the basis and the regulation of these processes.

This beautiful song dates back to the end of the 17th century. It was not based on natural expression, but on the supernatural rise of the human voice towards regions of the soul where speech has no access. This beautiful song touches first of all by the mastery of the breath, the anointing of the line, the variety of “coloring” (vocal athletic style). One day when Lady Joan Sutherland was asked to define “bel canto”, she replied: “the high piano”. Rossini, Bellini, Donizetti… Even Verdi, who first imposed himself against ornament, ends up in Rigoletto or La Traviata by practicing this ancient magic as a master. It is therefore to them that the Voice Academy will dedicate its fifth edition, over the course of a week to Les Treilles, whose guest professor will be the immense Belcantist Patrizia Ciofi. Style, syntax, technique, repertoire, who better than the Tuscan soprano can transmit to young artists the secrets of this both sensual and celestial song ?

Her novel project will be situated in the near future, between dystopia and farce: the burden represented by the cohort of inactive and unproductive (but not dependent) elderly people, experienced as a “bottomless pit”, has become unbearable. A new concept has germinated in power circles: voluntary departure training, dubbed a “great humanitarian cause”. The tool created to implement it is the “Dignified Departure Training Establishment”. The aim is to get people to consider, then accept and then desire their own disappearance. These D.D.T.E. multiply, and meet with growing success. [find out more]

“The Camargue region is the reverse of an island. A body of water in the middle of the land. Ponds, salt marshes, fresh water, brackish water… A landscape which seems so wild but which also results from human interventions of long time on a very particular biotope, an attempt of domestication by clever transfers of fluids… A Mediterranean space, with its colors, its composition and its material. And on which the light acts as a revealer.” By broadening her work to other forms of life: plants, fauna and portraits, this search for a form, starting from nature and moving towards the human, has always been at the heart of Sophie’s work. [find out more]

His project is to follow the coastline and photograph, cut in space and time, project his dreams and desires. “I have always hoped that, behind the visible aspect of things, a spirit hides. A kind of animism where photography could reveal a little of this beyond … Would it suffice to stop time to see beyond appearances?” [learn more]

EXHIBITION OF THE FEMALE LAUREATES OF THE “RESIDENCE FOR PHOTOGRAPHY” PRIZE AT LA CRIÉE, MARSEILLES NATIONAL THEATER

Exhibitions open to the public from Tuesday to Saturday from 12 p.m. to 6 p.m. and on show days [learn more]

“[…] And I see a mathematician whose mathematics are poems […]” (Anne Gruner-Schlumberger. Natural and Human History of a Project. 1979).

Mathematics will be represented at the Treilles foundation since the 1980 constituent meeting in which Bernard Teissier and René Thom participated… and thereafter they will never leave them… One of the first boarders, David Fowler, a British historian of mathematics, will write there in 1981 the first version of his Mathematics of Plato’s Academypublished by the Oxford editions in 1987. He will say on this subject: “The Fondation des Treilles me provided the chance to participate in a practical way, in a living reconstruction of my own vision of the Academy of Plato “.

The general principles of the discipline will also be dealt with in works such as that of Roshdi Rashed, Christian Houzel and Gilles Christol, « Œuvres de Pierre Fermat – I – La théorie des nombres » (Pierre Fermat’s artworks, the theory of numbers), Editions Albert Blanchard, “Sciences dans l’histoire” collection, Paris, published in 1999, or that of Olivier Cogis and Claudine Robert, « Au-delà les ponts de Königsberg – Théorie des graphes – Problèmes, théorèmes, algorithmes » (Beyond the Königsberg Bridges – Graph Theory – Problems, theorems, algorithms), published by the Vuibert Editions in Paris in 2003.

The seminar organized in Les Treilles by Etienne Ghys (ENS Lyon) and Nicolas Bergeron (Institut de Mathématiques de Jussieu, CNRS, Paris) in 2014: La topologie algébrique du point de vue de Poincaré (Algebraic topology from the point of view of Poincaré) will give birth to another transmission medium of knowledge through the Analysis Situs website in January 2017. 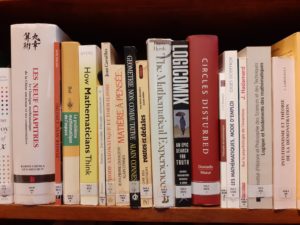 Do you wish to apply to one of the activities offered by the Fondation des Treilles ? Please consult the deadlines schedule below and the page dedicated to each activity to know more about our application procedures.