About Beauty – organized by Laurent Martin

Why should we worry about beauty today? Isn’t this value obsolete, rejected by modern criticism and contemporary art, reduced to the rank of auxiliary of the universal market, despised by our functionalist civilizations which only consider it in terms of the profits they can draw? But maybe it’s time to rethink beauty and perhaps rehabilitate it. Is aesthetic judgment also moral or political judgement? Is beauty necessarily harmonious? Can art do without beauty? This last question should not lead to restrict our questioning to the artistic universe; if there is a mathematical beauty or an eroticism of the deformed, this means that many fields and their specialists are potentially concerned by a reflection on beauty, and that this must necessarily be collective. And what place would be more suitable than the Treilles estate, a hymn to beauty, to host this reflection?

Today we observe a rapid development of international research on “programmable active materials” capable of transforming themselves by actively responding to external stimulation.This lively material, often bio-inspired, then seems “alive”. It makes it possible to imagine new material productions, at all size scales, and new modes of interaction, appealing to the sensitive. This seminar aims to initiate a dialogue between physical sciences, mathematics, biological sciences, art, design, architecture and philosophy that can lead to new objects.

A paper database in prehistory: the potential of the “Archivio di tipologia analitica” and the problem of cumulative data in the human sciences – Sébastien Plutniak

The Archivio di tipologia analitica is an atypical review published from 1973 to 1998: it contains around 55,000 descriptions of prehistoric carved stones from Italian, French and Spanish sites. These descriptions are encoded in character strings composed according to the principles of “analytical typology”. This voluminous corpus of printed data has never been exploited in its entirety, although it is of interest to archaeologists, digital humanities specialists, and historians of formalization in SSH. This stay aims to 1) bring together the skills necessary for the computerization of this data; 2) discuss the technical choices relating to the recording and publication of data; 3) start recording and organize their pursuit.

Robert Pinget (1919-1997), born Swiss, crossed the border in September 1946 to reach Paris to become a painter. Twenty years later, finally becoming a writer and crowned with the Femina Prize for his novel “Someone”, he resumed, while retaining the Geneva nationality, the French nationality of his maternal grandfather and his paternal great-grandfather, and settles in an old farm in Touraine, where he will continue to paint in secret. Our investigation focuses on his trajectory and traces.

In May, our second winner of the author’s residency Prize will continue her residency. Her novel project, Chronicle of a Tachycardia, examines her romantic life. This investigation gives a glimpse of the emotional mechanics at work, which always pushes her to want “better than that”, but also shows to what extent her relationship to her body changes with the times, which also evolves: between the 2000s and today, the perspective on women has greatly changed. [find out more].

40 years of creation, research and publications 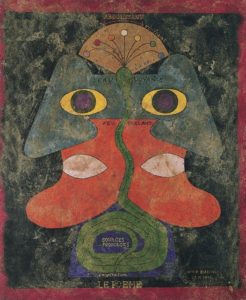 “It is one of the great originalities of this patron to have united to a point rarely achieved so much passion for artistic creativity in all its forms as well as an intense intellectual curiosity and to have made them vibrate together in what she called « a faith in love »”. Maryvonne de Saint Pulgent, An intimate collection, Travel « inside the sight » (Fondation des Treilles, 2011).

« The Spring painted with wax on cardboard wakes me up every morning, I hear the sound of water, that of artists expressing themselves.” (Letter from Anne Gruner Schlumberger to Dominique Bozzo, January 31, 1993).

This diversity in artistic expression that our founder loved is also found in the publications of Les Treilles, since in the latter are addressed both architecture with the edition in 2017 of the volume Modernes Arcadies, a collective work under the direction of Maurice Culot and Bruno Foucart (AAM Éditions), painting, with the very last publication of Annie Cohen-Solal: Picasso l’étranger (A foreigner named Picasso) (Fayard, 2021) which leads us, from a new angle, in the footsteps of this representative artist from the Fondation des Treilles collection ;  but also photography : Juliette Hanrot, La Madone de Bentalha : History of a photography (Armand Colin), developed at les Treilles in 2010 and published in 2012 or dancing : Dancing Anarchy: Anarchist theories and practices in the Judson Dance Theater, Grand Union et le Contact Improvisation, (P * Revista Brasileira de estudos da Presença / Brazilian Journal on Presence Studies, 2020), by Romain Bigé, winner of the Young Researcher Prize in 2019.

For the history of the discipline, we should also mention the work of Bénédicte Coste, who came in 2012 : Walter Pater – La Renaissance. Studies of art and poetry, (Classiques Garnier, 2016), that of Daniel Grojnowski : The incoherent arts and laughter in the plastic arts, (Editions Corti, 2015), published following his writing residency in 2012 or very recently, the very rich Paroles de commissaires. Histoires. Institutions. Pratiques. (Words of Commissioners. Stories. Institutions. Practices) (Les presses du réel, 2020), for the writing of which Brigitte Gilardet benefited from a residential study in 2020, which allowed her to explore the bibliographic collections including that donated by Danièle Giraudy.

This picture would not be complete without the evocation of the many publications related to music, a much appreciated art at les Treilles, especially through the Voice Academy, such as those of Cécile Auzolle: Towards strangeness or the opera according to Philippe Boesmans (Actes Sud, 2014), from a residential study in 2013, or Philippe Boesmans – A journey through modernity (Éditions Aedam Musicae, 2017), a work prepared during the 2016 seminar: Post-modernism or singularity ? Philippe Boesmans, that of Yves Balmer, Thomas Lacôte and Christopher Brent Murray : The model and the invention. Messiaen and the loan technique (Ed. Symétrie, December 2017) or those dedicated to the pianist Claude Helffer : Philippe Albèra, Interviews with Claude Helffer (ed. Contrechamps, Geneva, 1995) and Claude Helffer, Fifteen musical analysis from Bach to Manoury (Editions Contrechamps, Geneva, 2000) resulting from residential studies in 1994 and 1996. A musical composition by Gérard Grisey will also see the light at les Treilles following a stay in 1997 : Vortex Temporum (Accord, 1998).

Finally, the recent publication of Augustin Voegele, winner of the 2017 André Gide – Jean Schlumberger Centre Prize: Music and desire in André Gide’s work (Classiques Garnier, 2020) must be pointed out .