This seminar, organized by Ghislaine Dehaene, will bring together participants from different fields of neuroscience to reflect on the initial organization of the human brain. Indeed, human infants are the most effective learners. In a few months, they go beyond animal abilities, showing the first evidence of symbolic reasoning. By combining physiological research in rodents and primates, behavioral and imaging research in adults, computer models and the most recent infant data, the researchers’ goal is to come up with biologically plausible models that can explain the remarkable learning abilities of infants.

This publication project explores how caste is mobilized as a resource and as social capital by Indian regional elites for economic and political purposes. It demonstrates the still current importance of the caste in India for accessing power positions and for maintaining the privileges of regional elites. This book will endeavor to redefine the concept of the dominant caste in order to make it relevant by adapting it to India’s contemporary developments. The research is based on several years of ethnographic surveys of the population.

The project brings together a historian, a mathematician and a philosopher. The aim of their work is to show how historical epistemology makes it possible to understand and analyze the Bourbachic enterprise and, in reverse, how it makes possible to highlight the relevance of the guiding theses of historical epistemology in concrete mathematical work. General philosophical theses will be supported by the study of uniform spaces, filters and the critical edition of essays on general topology.

In March, we will welcome our first winner of the author’s residency. His novel project, The Tomb of Parsifal, will evoke the theme of war, through the eyes of a Franco-Russian writer committed to the side of “pro-Western” rebels in the war in Ukraine. He will only live in war for a few months, but little by little will lose his illusions about justice, about right and good, and about the possibility for man to overcome violence. [find out more]

The work of the three winners of the 2020 Photography Prize, Sylvie Hugues, M’Hammed Kilito and Jean-François Spricigo, will be exhibited in the photographic space of Initial Labo in Paris, with which the Fondation des Treilles has entered into a partnership in order to highlight all the Prize winners.

This exhibition will be the opportunity to discover the projects carried out by the laureates during their residency in 2020, but will also announce the future 2021 residents.

Every year, the Fondation des Treilles awards the Young Researcher Prize to doctoral and post-doctoral students under 35 years of age, in order to recognize the excellence and originality of their research work. This year, out of 142 candidates, 31 researchers (15 doctoral students and 16 post-docs) were rewarded. Congratulations to the winners!

Under a rain of stars…

« […] The Fondation des Treilles […] was my Museum of Alexandria : like the Ptolemies of olden days, its princes allow scholars and poets to explore the secrets of the Universe in peaceful conditions, housed and very well fed. How to thank the princes ? »

It is in these terms that Jean-Pierre Luminet thanks the Foundation in Le bâton d’Euclide (Euclide’ staff) published in 2002 by Lattès after a residential study in Tourtour in 2001.

Astronomy has always been a favorite subject at Les Treilles. This is evidenced by the first subscriptions to the magazines L’Astronomie and Ciel et Espace (Sky and space) in the late 1970s, as well as the purchase of a professional telescope that has allowed many residents to observe the stars during memorable evenings.

At the same time, the organization of several seminars and the holding of many residential studies around this theme will lead to numerous publications. 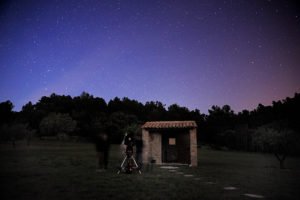