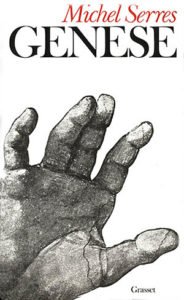 “For Annette Gruner Schlumberger, in affection and thanks”

This is how Michel Serres’ work, Genesis, published in 1982 by Grasset starts … quite a symbol … This book can, rightly, be considered as the first Treilles publication since its foreword, Subject of this book, was written in Tourtour during a stay in 1981, the original year of activities at the Treilles (see on our research blog Treilles: Activités 1981). We will neither remind here the importance of Michel Serres in the conception of the Treilles nor the bonds of affection which united the philosopher to our founder. Genesis attempts to describe as closely as possible what is chaotic and multiple in nature or culture. It’s a book of beginnings …