Developed within the framework of the ALEA Scientific Research Network (IUF / ANR) by five specialists in literary storytelling theory, sociology of games, computer science and neuroscience, ASTERION is an online narrative game project intended for the study perceptions of chance. The meeting will make it possible to produce an operational prototype of a serious game measuring the sensitivity to chance of the participants in an interactive experience.

In April, we will welcome our second winner of the author’s residency Prize. Her novel project, Chronicle of a Tachycardia, examines her romantic life. This examination gives a glimpse of the emotional mechanics at work, and which always pushes her to want “better than that”, but also to what extent her relationship to her body changes with the times, which also changes: between the 2000s and today, the perspective on women has changed considerably. [find out more]

This month we will welcome our first 2021 laureate of the Residence Prize for Photography. His project is to follow the coastline and photograph, cut in space and time, project his dreams and desires. “I have always hoped that, behind the visible aspect of things, a spirit hides. A kind of animism where photography could reveal a little of this beyond … Would it suffice to stop time to see beyond appearances?” More info on our website.

To teach is to hope…

This title of a book by Pierre Léna published by Éditions du Pommier, following a residential study at Les Treilles in 2012, largely sums up the motivations that led to the birth of the beautiful La main à la Pâte project.

In 1995, three academics, Georges Charpak, Yves Quéré (see his testimony here) and Pierre Léna proposed to the Minister of National Education a renaissance in the teaching of science in schools. In 1996, in Les Treilles, a meeting between scientists, primary school teachers and pedagogues, Enseignement scientifique, inventivité et insertion scolaire à l’école élémentaire (Teaching of science, inventivité and integration at elementary school) will materialize the birth of the La main à la Pâte operation  through the drafting of a collective work prefaced by Georges Charpak.

This will be followed, after a seminar in 1998, La main à la pâte : rencontre des Treilles IV (4th meeting at les Treilles), by the publication of the first issue of the Graines de sciences series. Eight other volumes will subsequently complete this collection which proposed to discover science “without fear and with pleasure”.

Other publications will emerge in the wake of this collective adventure, such as those by Mireille Hartman in 2001: L’astronomie est un jeu d’enfant  (Astronomy is a Child’s game) and Explorer le ciel est un jeu d’enfant (Exploring the Sky is a Child’s game), published by Le Pommier; that of David Jasmin in 2004: L’Europe des découvertes (the Europe of discoveries) from the same publisher, Les sciences à l’école primaire (Sciences in primary school), or more recently in 2018 that of Gilles Cappe and Philippe Delforge, enseigner autrement les grandeurs et les mesures (Teaching sizes and measuring differently), published by Retz.

Alongside educational books like that of Isabelle Causse-Mergui: A chaque enfant ses talents ; vaincre l’échec scolaire (Each child has his talents; conquering school failure), Le Pommier in 2000 (cf. Activités 1998) or those of Yves Quéré, La science institutrice (teaching science) published by Odile Jacob (2002) and Enseigner, communiquer. Un art ou un métier ? (Teaching, communicating. Art or profession?) (Le Pommier, 2008), resulting from the Rénover Science et Technologie au collège (Renovating Science and Technology at the secondary school) colloquium, appear publications whose concerns are in tune with the times such as those coordinated by David Wilgenbus: Le Climat, ma planète et moi  (the Climate, my planet and I) in 2008 or Ma maison, ma planète et moi (my home, my planet… and I) in 2010 and finally, the latest in the series: Le Climat Entre Nos Mains – Océan et Cryosphère (the climate in our hands – ocean and cryosphere), Office for Climate Education, published in 2019. 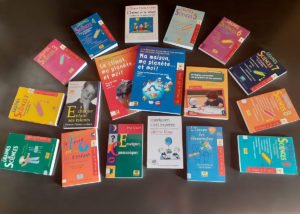